This page is dedicated to my daughter, Rebecca,
who appreciates food more than I do.

Like for many people, food holds endless fascination for me. The tourist sights, museums and cathedrals are okay, but the sights that draw me in the most as I walk through the streets of Arequipa are the tiny tiendas (stores) selling all kinds of packaged and fresh wares; the piles of fruits and open air butchers in the mercado, the street food, and the huge menu boards outside local restaurants. It is not surprising that only my second post was a review of my first lunch on my own in Arequipa. You can read about my first foray into lunch here.

So, I am dedicating this page to food-related images and my impressions. I will add to them from time to time. One reason for this page is so my daughter Rebecca, a professional cook who is more fascinated with food than I am, will get even more excited about joining me in April. (I fear we will not have enough days here in the month to do justice to the food.)

April 4, 2014: At the recommendation of Adela and Manuel, our hosts in Arequipa, we went to Tradición Arequipeña for lunch today. It was only about a 10 block walk. Once inside, it was a pleasant and relaxing place to dine—with fountains, foliage everywhere, a live band, thatched umbrellas over the outdoor tables, and excellent service. We enjoyed a bottle of chicha morada, a Peruvian soft drink made with purple maiz. You can find a recipe for it here. Rebecca ordered the very traditional rocoto relleno (stuffed chili pepper) with pastel de papa (potato casserole). And I also chose a traditional dish, chupe de camarones (shrimp chowder). This very flavorful and colorful soup includes whole fresh shrimp, shrimp stock, papas amarillas (yellow potatoes), aji panca (a chili pepper), onions, garlic, egg, milk and pieces of queso fresco (fresh cheese)! 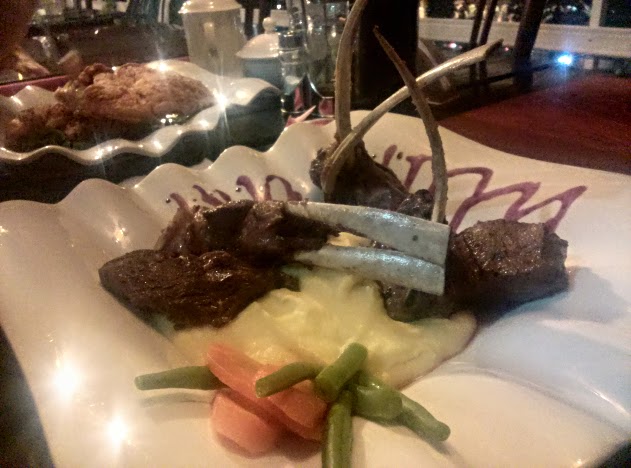 April 3, 2014: At the end of Rebecca's first full day in Arequipa, we went to the Plaza de Armas to enjoy a meal at La Terraza (See January 26th below). This time, my meal of fried trout was not so good. I am tired of fried foods and did not realized that I was ordering fried trout and it was way too salty. However, Rebecca enjoyed her meal of lamb chops cooked rare just the way she likes them. It was a beautiful presentation!

March 9: Espuma! Things are not Always what They Seem.

Carnival came to Chucuito on Sunday. There are two or three groups of people who dance around the plaza with their pipers and drummers. They take turns dancing and then resting. Between dances, they sit together passing around large bottles of beer and a glass. Each person drinks part of what they pour in the glass and pours the last bit on the ground. I figured this had some spiritual significance, but I had thought that people usually poured the sacrifice out before drinking, so I was a bit confused. One of the women came over to where I was sitting on the curb and offered me some beer. I asked and gestured if I should put some on the ground and she nodded so I imitated them and thanked her. That was so cool!

But later, when I was talking to Samantha and Juan (my hosts at Posada Santa Barbara), I asked about the significance of the practice. To my disappointment, Juan said that they were pouring out the espuma (foam) rather than drink it. Samantha added that they even do that inside, making a mess all over their restaurant floor, which requires a great deal of cleaning after a party. She made a pretty disgusting face! 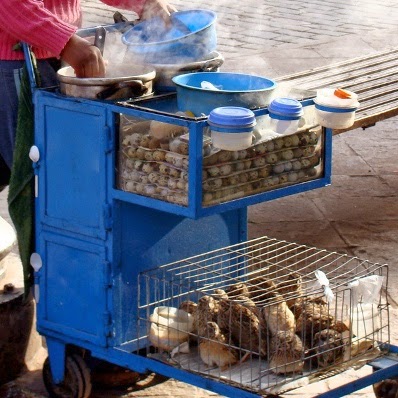 March 12:  I finally got to try huevos de codorniz (quail eggs) from a street vendor! They are hard-boiled and the vendor peels them for you and with a toothpick, she counts five out into a little bag asking if you want sal (salt). For a sole, you get to walk down the street piercing the bite-sized eggs with the toothpick and popping them into your mouth. What do they taste like? Very creamy hard boiled chicken eggs! You can read more about them here. 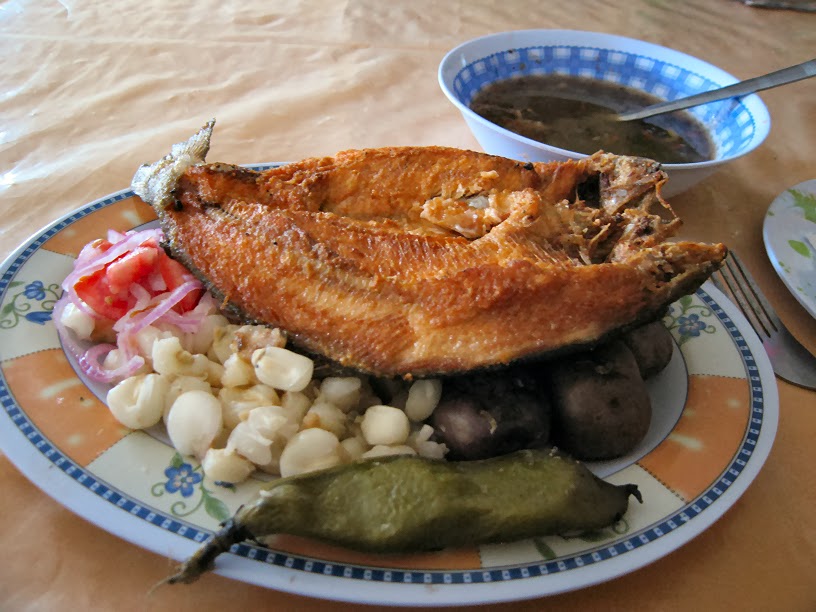 February 16: Trucha Frita (Fried Trout) from Lake Titicaca is a traditional Peruvian dish. This one was served with a bowl of Chairo (pronounced chi'-ro), which is a traditional soup of Chucuito (just south of Puno, Peru). The base uses black potatoes which have a very strong taste that I am having a hard time getting used to. I thought I would never see a potato I did not like! The trout, however, was delicious! Notice how it is cut butterfly-fashion from the tail through the head. 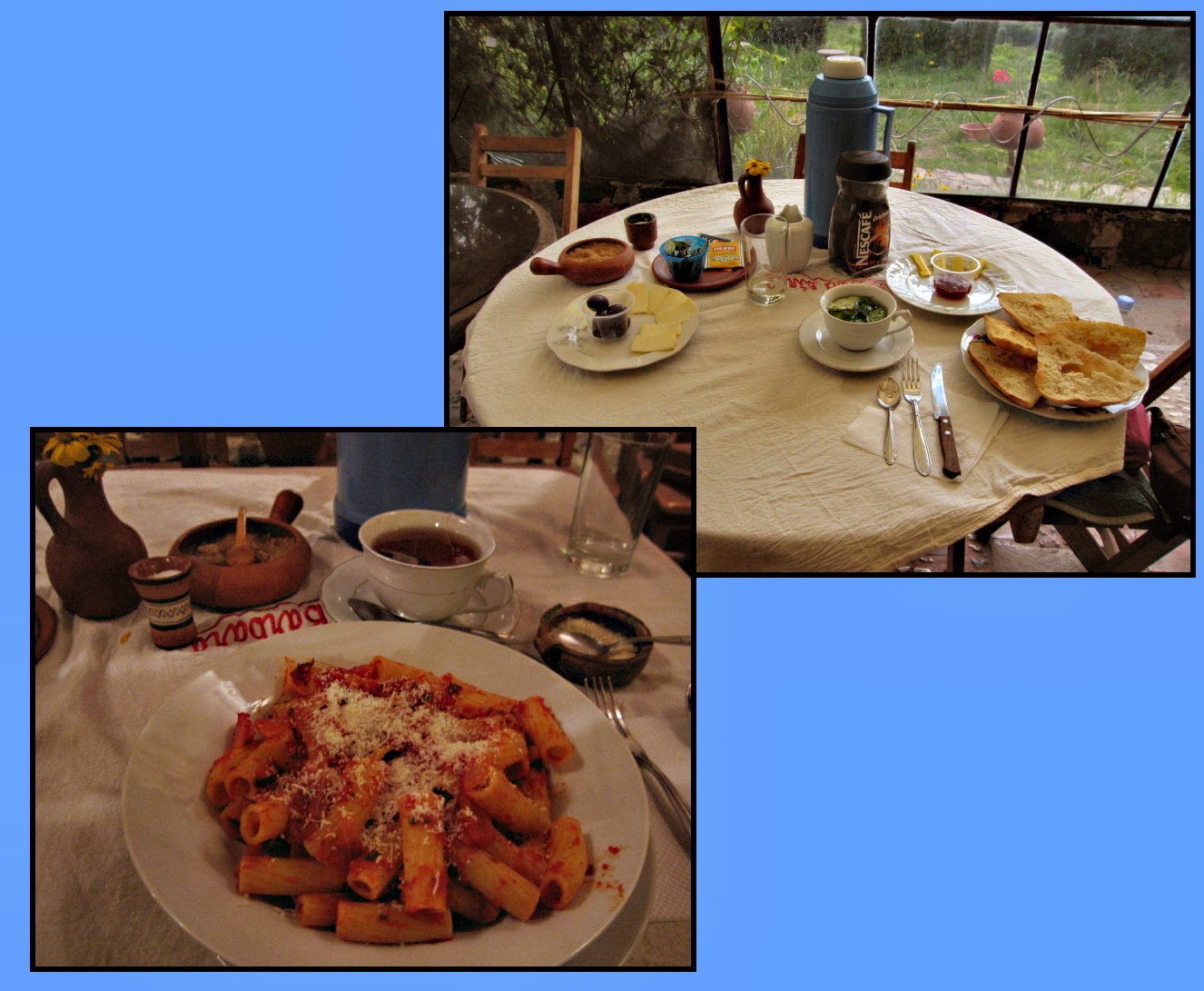 February 15: Breakfast and dinner at Posada Santa Barbara.  Juan sets a lovely table and plays Peruvian and Italian music in the background. I feel like I am in a foreign country!  ...Oh...


It must be sandia (watermelon) season here. Just one block from my hotel in Puno, two semi trucks were unloading watermelons into warehouses—one watermelon at a time via a melon brigade. One brigade consisted of about 7 men (and one young man about 12 years old). Women were selling watermelon everywhere on the street—whole, half, quartered, sliced, or cut up and placed in cups with a pick. I bought a cup of cut up slices and headed back to the hotel with the intention of photographing it before eating. I entered the courtyard and could not resist sharing with the helpful men who work at the hotel: 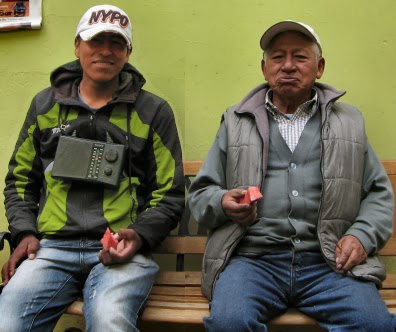 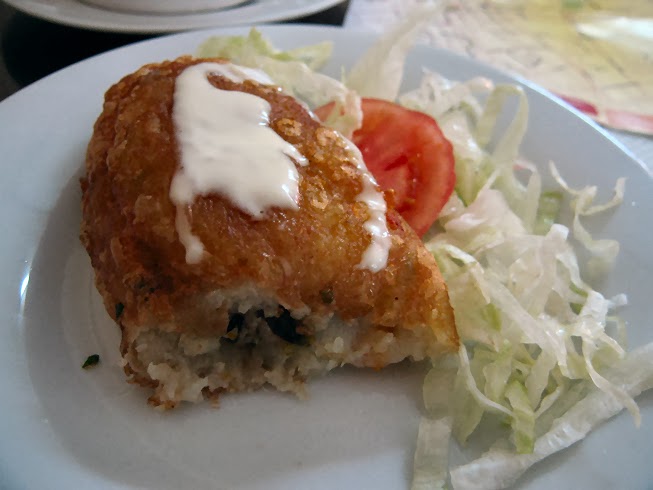 February 11: Papas Rellenas in Puno
I found a nice little snack cafe near the main plaza in Puno. I finally got to try Papas Rellenas, made from a potato dough that is then stuffed with meat, olives, hard-boiled eggs, or whatever the cook desires, and spices. The whole thing is then deep fried. Yumm...

I ordered a papa rellena and a cup of mate de coca. (See the Benefits of Coca) Oh, the flavor and texture--deliciosa! I just had to order a second one. And it was just the snack for late morning, since I had eaten breakfast at 6:30 and was already hungry again. (Nice to know the altitude of 12,500 feet had not affected my appetite!) You can find a recipe for papas rellenas here.

February 6: Buying Olives in the Market 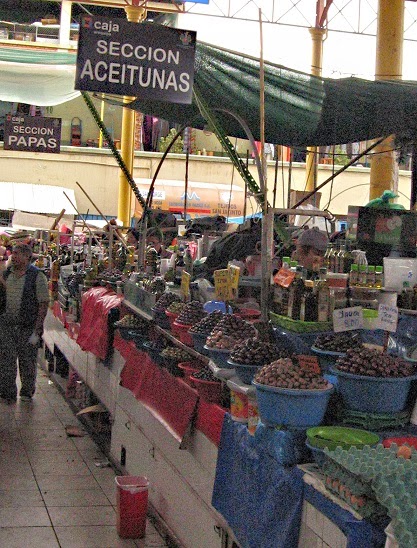 Before I went to Peru, I had seen pictures of the Arequipa market and I could not believe the prices of the fruit and especially the olives. But, not only are the olives inexpensive, but they are delicious, and grown very near here at Tacna. The market has its own separate section for olives: Seccion Aceitunas (Olive Section) is on the overhanging sign.

I have been buying olives to bring home to share with the household. Manuel like to pit them and put them on his bread for breakfast. (And speaking of pits! When you buy a tamale in Peru, be careful. It is likely to have olives in it--compete with the pits!)

Now for the price! Yesterday I paid 4 soles for a half kilo of olives--that's $1.30 per pound! And I don't even bargain in the market--I cannot bring myself to do so. 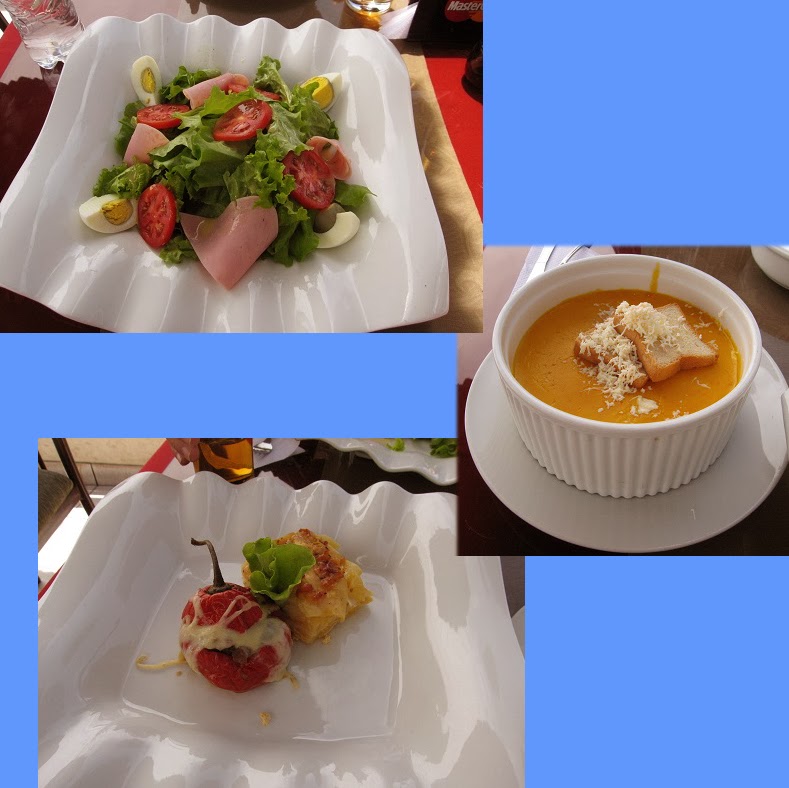 January 26: I ate at my first somewhat "fancy" restaurant on the Plaza de Armas. La Terraza is perched al fresco on the top floor (up 3 flights of stairs!) and overlooks the plaza and the Cathedral of Arequipa. It was a lovely day--about 70 degrees F. We shared (from the top) Cesar Salad, Macre yellow Pumpkin Velote, and Rocoto Pepper (stuffed pepper--practically an emblem of Arequipa) served with Pastel de Papas. Look at the size of those plates! We almost needed a larger table. The soup was partcularly delicious. 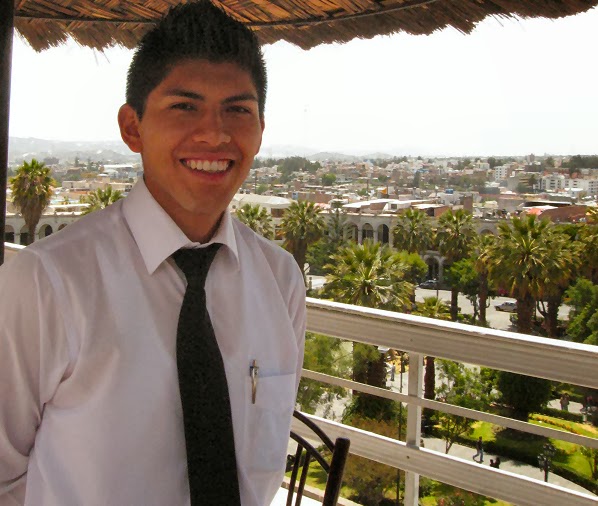 
Most main courses include two starches, something we Americans are not used to. Many times rice and potatoes are served on the same plate. In this case Adela served sweet potatoes and "white" potatoes alongside this tasty pan seared tilapia. 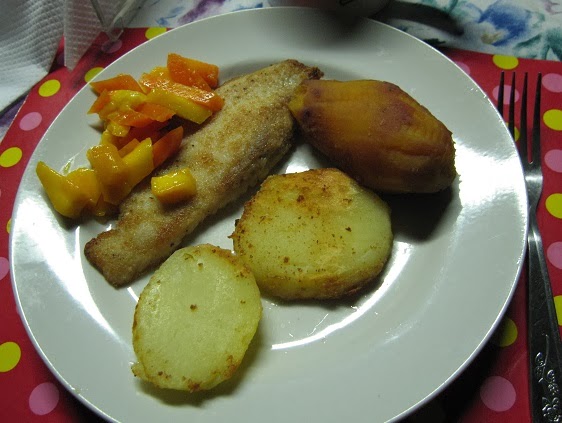 January 22: I finally had my first cerviche at my "favorite" restaurant, El Perejil, for lunch: